In order to write about life first you must live it.
― Ernest Hemingway

We don’t like bull fighting. It’s cruel. We care for and hope the bull will win. We, meaning Americans in general, don’t get it or understand how any civilized people could watch such a sport and actually sit through it and even applaud. I adore animals. I cannot watch the maiming and killings. So what did Hem see that we don’t?  He loved animals and he had great heart and empathy.

I have to start by noting that I have always found The Dangerous Summer, Hemingway’s chronicle of a summer following two competing bullfighters, to be a wonderful, original and absorbing book. It started as an Esquire article and expanded to the book. I really loved it but for the killing of the bull scenes.  I even understand and can accept the drama of the matadors, their dignity and honor.  As much as all of us shun this sport, please take a chance and read the book for the saga and adventure that it was.  It is excellent writing and you become part of the pageantry, of the training, and of the honor of being a bullfighter.

Pamplona of course is a key portion of The Sun Also Rises and Brett runs off temporarily with the young matador.  She then does her noble act of leaving him so as not to ruin him.  Because Spain and Pamplona are so wrapped in the Hemingway image and lore, it is important to know a bit about it, although not imperative to accept that bullfighting is in fact noble in its enactment of the life and death cycle.

So that brings us back to the old philosophical question: Must we avoid a writer because we hate his subject matter? My first post talks about how I don’t like hunting, fishing, war, bullfighting, heavy drinking and yet I love Hemingway.  How is that possible?  Because in the fewest words possible, Hemingway gets to the heart of what matters, what makes all of us tick, what it means to die and to live.  The arena may be war or fishing or bullfighting but it’s about love, hate, living and dying. Thus you don’t have to love his forums to love his books.

I just read in Hemingway’s Cats, a truly lovely book by the way, that Papa lost his love for big game hunting as well as for bull fighting in his last years. He chose later in life to photograph animals in Africa, not shoot them, and felt that bullfighting had become a commericial and depressing spectacle. I admire people who can change opinions and he could. Ah, just more for me to like.

By the way, I just came across the below which is some footage of Hem that I enjoyed. Please don’t take offence by the title of the link. I just copied it!  But it is a treat to see Hemingway moving, walking, in his home. Take a look. I loved it.

Every man’s life ends the same way. It is only the details of how he lived and how he died that distinguish one man from another.   Ernest Hemingway

It has been said someone bet Hemingway that he couldn’t write a story in six words that would make you cry.  Try this on for size, ye of little faith.

If that doesn’t tear your heart out from the inside out and make you gasp for breath, then you have no soul.

Hemingway was complicated.  For those of you who’ve read this blog from the beginning, and especialy the Mask post, the Hemingway bluster and the macho “stuff” were both real and a mask for what Hemingway felt he should be.  Please remember his devastation at the death of his cat, Willie.

The above, for me, says so much. Can you in six words sum up anything?  In my women’s group, we did a similar exercise. In six words, sum up your life.  We had three tries ( three versions) if so inspired. It’s not easy. Mine were something like: ” Good Girl, Bad Girl, Okay Woman” and “Love as the answer, not sure.”

This will be a short post.  I find the above so thought-provoking and devastating that I think it’s enough.  Hemingway is anything but a one-trick pony.

1.)      If you were lucky enough to have lived in Paris as a young man, then wherever you go for the rest of your life it stays with you, for Paris is a moveable feast.  A Moveable Feast.

2.)      You belong to me and all Paris belongs to me and I belong to this notebook and this pencil. A Moveable Feast.

3.)      Drinking wine was not a snobbism nor a sign of sophistication nor a cult; it was as natural as eating and to me as necessary.  A Moveable Feast. 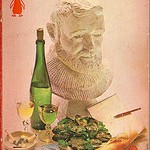 4.)      If the reader prefers, this book may be regarded as fiction.  But there is always a chance that such a book of fiction may throw some light on what has been written as fact.  A Moveable Feast.

5.)      I always worked until I had something done and I always stopped when I knew what was going to happen next.  That way I could be sure of going on the next day.  A Moveable Feast.

Working at the Finca
6.) Let him think that I am more man than I am and I will be so. The Old Man and the Sea
7.) So far, about morals, I know only that what is moral is what you feel good after and what is immoral is what you feel bad after.  Death in the Afternoon.
8.) “Forget your personal tragedy. We are all bitched from the start and you especially have to hurt like hell before you can write seriously. But when you get the damned hurt use it—don’t cheat with it. Be as faithful to it as a scientist—but don’t think anything is of any importance because it happens to you or anyone belonging to you.”
Letter to Scott Fitzgerald, dated 28 May 1934
9.) Now is no time to think of what you do not have. Think of what you can do with what there is. The Old Man and the Sea. 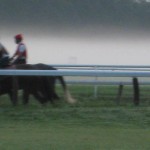 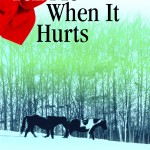