Everything in the Hemingway world seems to be percolating and changing and evolving, especially new versions of his classics.

Hemingway wrote the Green Hills of Africa in 1935. He and his second wife Pauline had just taken a hunting safari on the Serengeti Plains leaving Jack, Gregory and Patrick at home. Hemingway then chronicled the adventure, adding fiction to the non-fiction.

A new edition has come out. It’s been authorized by the Hemingway estate and has a new introduction by his grandson Sean. His son Patrick also shares some personal memories. One new feature that will be historically interesting is that a diary of the trip was kept by Pauline and her observations will be quite interesting to read. That diary will be part of the re-issue.

One of Pauline’s observations is that the chronology of some events was changed by Hemingway and she traces his short story The Short Happy Life of Francis Macomber to an incident that occurred on that trip.

So! The Sun Also Rises has been reissued (one version shows the book as originally envisioned with changes Scott Fitzgerald suggested and which Hemingway implemented); A Moveable Feast has been reissued; and A Farewell to Arms has also been reissued.

I read The Green Hills of Africa only once. Being an animal lover, I found the hunting and the carcasses of animals very disturbing. I realize that we have to take all of this in the context of the times when the concept of conservation was truly unexplored. As his grandson Sean noted, portions of Green Hills might be uncomfortable for the modern readers. It’s somewhat telling that Hemingway notes that he fears the consequences of western countries expanding into an undeveloped region. “A continent ages quickly once we come. The natives live in harmony with it. But the foreigner destroys, cuts the trees, drains the water supply so that the water supply is altered. The earth gets tired of being exploited.” 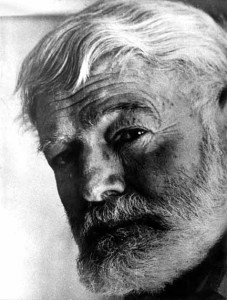 This reminded me of the epithet of The Sun Also Rises about the earth enduring and enduring.

In any event, it should be an intriguing read with some insight into the evolution of Hemingway’s thought processes plus Pauline’s observations.