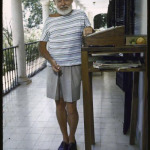 10. He always wanted a daughter. His fourth wife Mary became pregnant and a girl was expected, but it was an ectopic pregnancy and was lost. Hemingway had three sons—Jack, the oldest, with his first wife Hadley, and Gregory and Patrick with his second wife Pauline.

2 thoughts on “Some Hemingway Trivia for the Day”