Dear Readers: I just read Night at Key West and it was truly great fun. It takes place in Key West in the Thirties when our main character, Simon, dispatches to Key West to solve a disappearance that becomes a murder investigation. I saw Simon as a bit of an Aaron Hotchner sidekick and a Nick Adams sort of reporter of the odd events around him.  It is really a kick and Hemingway features prominently.  Below is my review on Amazon and link. 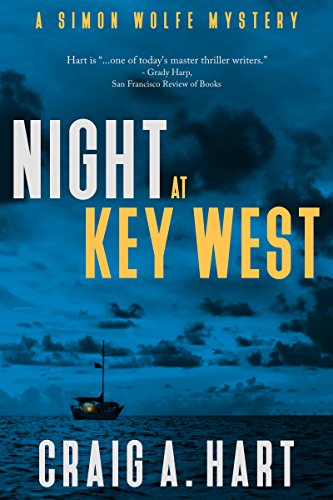 I just finished reading Murder in Key West by Craig A. Hart and I enjoyed it immensely. I initially read it because Hemingway is a main fictionalized but based on reality character, and I read almost everything Hemingway-related. However, the book was wonderfully involving, funny, fun, and yes, a real mystery to figure out with trips and twists at most page turns. There’s enough Hemingway for old hands to enjoy with inside jokes about the pool in Key West and Scott Fitzgerald’s editing of The Sun Also Rises as well as fun anecdotes for readers who know nothing about Hemingway.
The writing itself is terrific. I laughed at some of the funny phrases such as “largely ineffectual energy” and “like a chihuahua watchdog” and i really enjoyed the sense of Key West in the 1930s and the small town characters at the courthouse, the police station, and the diner. It was a fun Sam Spade mystery, not too heavy (Simon the narrator is a bit of a Nick Adams persona) and I highly recommend it to mystery readers, lovers of fiction set in the ‘30s, and Hemingway fans. Great fun and good writing in one delightful package.
https://www.amazon.com/Night-West-Simon-Wolfe-Mystery-ebook/dp/B07DTNM2Y1/ref=sr_1_1?s=books&ie=UTF8&qid=1540064715&sr=1-1&keywords=night+at+key+west