He and his wife Mary were settling into a new home on the banks of the Big Wood River in the Sawtooth Mountains of Ketchum, Idaho—better known as the ski paradise of Sun Valley. They had fled their longtime estate in Cuba shortly after the Batista regime was toppled by Fidel Castro. All of Hemingway’s family was expected to visit Ketchum at the end of the month to celebrate his 62nd birthday on July 21. 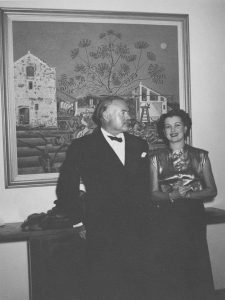 But on a Sunday morning — July 2, 19 days short of Hem’s birthday — the famed writer awoke early in a discombobulated and distressed mood. He left his bedroom and descended into the basement of his new home — described by The New York Times as a “modern concrete house” — where he unlocked his gun cabinet and grabbed his favorite shotgun and some ammunition. He climbed back up the stairs, walked across the living room, and stopped in the house’s oak-paneled entryway. The rest is literary history — and part of a family’s legacy of pain.

His wife recalled being awakened to “the sound of a couple drawers banging shut.” She went downstairs to ascertain the cause of the racket only to find a crumpled “Papa” on the floor.

When the Times ran its obituary of Hemingway on the front page of its July 3, 1961, issue, Mary Hemingway’s statement on her husband’s death was clear, concise and misleading: “Mr. Hemingway accidentally killed himself while cleaning a gun this morning at 7:30 AM. No time has been set for the funeral services, which will be private.” For decades, the myth of an accidental death dominated the biographical accounts of his life.

Hemingway was well-versed in the handling of guns and rifles. He received his first shotgun from his father when he was only 10. He famously wrote about his exploits on the battlefields of World War I and the Spanish Civil War, as well as his hunting trips in places as diverse as Walloon Lake near Petoskey, Michigan, to big-game safaris in Africa. If this fact wasn’t enough to raise an eyebrow about his death being accidental, there was also the issue of his father’s death in 1928.

A depressed and diabetic Dr. Clarence Hemingway fatally shot himself at age 57. The doctor, a general practitioner, used an old .32 Smith and Wesson revolver owned by his father. At the time, Hemingway wrote to his then mother-in-law, Mary Pfeiffer, “I’ll probably go the same way.” In his 1940 novel, “For Whom the Bell Tolls,” the main character’s father commits suicide with the same rifle his father had used during the Civil War. 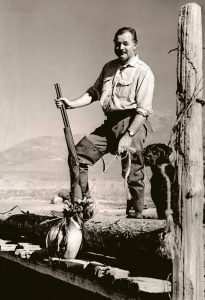 In 1961, mental health remained poorly understood, stigmatizing, and rarely discussed in most American families, including the Hemingways. Hence, no one could fathom why the most successful writer of the day — a winner of both the Pulitzer Prize (1953) and Nobel Prize (1954) — would kill himself. The back story, however, is far more conclusive.

Beginning in the late 1950s, Hemingway was working on his memoir of Paris during the 1920s, “A Moveable Feast.” For the first time in his fabled writing career, he was having trouble with writing projects and needed the help of his friend and biographer A.E. Hotchner. Hemingway often seemed disoriented and confused, which disturbed the macho writer to no end. Hemingway worried about financial security, even though his novels have never gone out of print and still sell hundreds of thousands of copies each year. In moments that struck Hotchner as paranoid, Hemingway was concerned about being followed by the FBI. Years later, however, Hotchner would learn that his friend had indeed been surveilled since the 1940s. 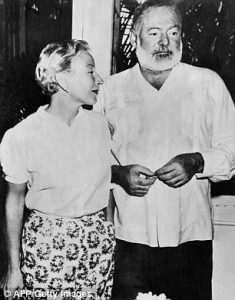 In December of 1960, Hemingway was admitted to the Mayo Clinic using a false name. He stayed there for two months, under the guise of being treated for hypertension, but was really there for severe clinical depression. He is believed to have undergone electroshock convulsive therapy at least 15 times. His psychiatrist, Dr. Howard Rome, gave him a clean bill of health and the writer was released in January of 1961.

But Hemingway continued his downward spiral. His wife Mary found him in April of 1961 holding his shotgun in a self-menacing manner and rushed him first to the Sun Valley Hospital, and later to the Mayo Clinic for more electroshock convulsive therapy. During the trip to Rochester, Minnesota, the plane stopped to refuel in South Dakota. On the airfield, Hemingway reportedly tried to walk into the propellers, which the pilot cut short just in time. Hemingway returned home on June 30, 1961, days before his death.

We now know that Hemingway suffered from severe depression, paranoid delusions and bipolar disease exacerbated by a history of alcoholism, severe head injuries and a genetic disorder of iron metabolism known as hemochromatosis, which can also cause intense fatigue and memory loss. Seven of Hemingway’s close family relations died by suicide, including his father, sister, brother and much later his granddaughter, the supermodel Margaux Hemingway.

The U.S. Centers for Disease Control and Prevention reports that suicide is the 10th leading cause of death in the United States, a preventable fate that has been increasing by 1 to 2 percent each year. The CDC’s National Center for Health Statistics recently reported that “the age-adjusted suicide rate among females increased 55 percent, from 4.0 (per 100,000) in 1999 to 6.2 (per 100,000) in 2018, while the rate for males increased 28 percent, from 17.8 to 22.8. Suicide rates were consistently higher for males compared with females over the entire time period.”

Failure to recognize, discuss and treat mental health disorders, as well as physical maladies that yield severe depression, are among the leading culprits behind these suicides. Substance abuse, addiction and serious life problems, such unemployment, poverty, trauma, and the break-up of families, can also lead to suicide.

In recent years, Ernest’s granddaughter, the actress Mariel Hemingway, has been an advocate for recognizing depression and bipolar disease early, getting treatment for these problems, and suicide prevention programs. Fortunately, we live in an era where these mental health illnesses are no longer issues to be ignored or ashamed of, and most of these conditions are treatable, though accessing help can still be a hurdle for many.

It’s also worth recalling the title of Hemingway’s best novel, which he began on his birthday, July 21, 1925 — “The Sun Also Rises.” For once treatment begins, a new day can be restored.

Left: Writer Ernest Hemingway works at his typewriter while sitting outdoors in Idaho in 1939. Photo by Lloyd Arnold/Hulton Archive/Getty

Dr. Howard Markel writes a monthly column for the PBS NewsHour, highlighting momentous historical events that continue to shape modern medicine. He is the director of the Center for the History of Medicine and the George E. Wantz Distinguished Professor of the History of Medicine at the University of Michigan and the author of “The Secret of Life:  Rosalind Franklin, James Watson, Francis Crick and the Discovery of DNA’s Double Helix” (W.W. Norton, September ’21).

2 thoughts on “Mental Health and Ernest Hemingway: Interesting article (All but the top photos added by me.)”