“As I ate the oysters with their strong taste of the sea and their faint metallic taste that the cold white wine washed away, leaving only the sea taste and the succulent texture, and as I drank their cold liquid from each shell and washed it down with the crisp taste of the wine, I lost the empty feeling and began to be happy and to make plans.”    —A Moveable Feast(1964)

Life’s greatest gifts to Ernest Hemingway were his appetite and being born in a century that allowed him to indulge it. No one travelled more widely or immersed himself so deeply in the culture of a place, picking up the language on the street, so that he could say with certainty, “If a man is making up a story, it will be true in proportion to the amount of knowledge of life that he has and how conscientious he is.” 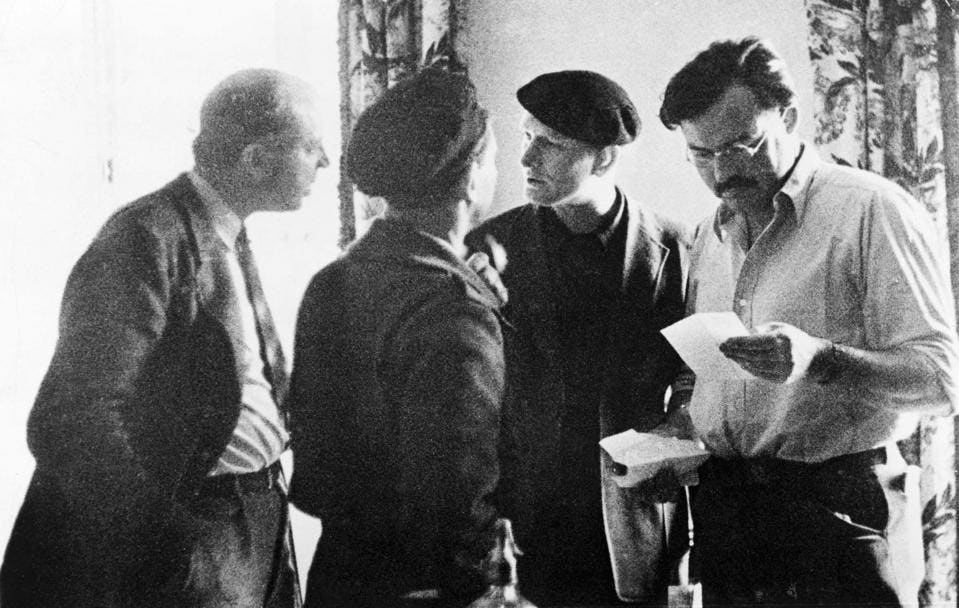 He knew a tremendous amount about wine, which he called “one of the most civilized things in the world and one of the natural things of the world that has been brought to the greatest perfection, and it offers a greater range for enjoyment and appreciation than, possibly, any other purely sensory thing which may be purchased.” He had an amazing capacity without getting drunk, though he often did, and he could write descriptions with great exactitude about drinks like the sugar-less frozen daiquiri at the La Floridita bar in Havana: “The frapped part of the drink was like the wake of a ship and the clear part was the way the water looked when the bow cut it when you were in shallow water over marl bottom. That was almost the exact color.” He held the official record for the largest number of daiquiris (which he liked without sugar) at La Floridita.

He liked his Martinis made with 15 parts gin and one of dry vermouth, a mix he called a “Montgomery” after the British Field Marshall, who liked to outnumber his enemy by that ratio before attacking. Hemingway preferred Russian vodka, Gordon’s gin, and Bacardi rum, and called deusico, a Turkish coffee he tried in Constantinople, a “tremendously poisonous, stomach rotting drink.”

While an ambulance driver in Italy during World War I, he drank cheap wine, writing, “On a retreat we drink barbera.” Decades later, staying at the Gritti Palace in Venice, he enjoyed Valpolicella and drank it frequently with his friend Giuseppe Cipriani, owner of Harry’s Bar there. He learned about French wines while a correspondent in Paris, enjoying the cafés of Montparnasse like La Rotonde, La Cloiserie des Lilas and Lipp. Aside from good Champagne, his taste ran to cheap, hearty red wines like Cahors, of which said, “If I had all the money in the world I would drink Cahors and water.” Equally so, Chablis was a cheap white wine back then, and he enjoyed that with sandwiches at lunch, but he did not consider Châteauneuf-du-Pape “a luncheon wine.” His favorite rosé was Tavel. He was, however, duly impressed when a waiter in Madrid brought him a bottle of Château Mouton-Rothschild 1906.

After Hemingway started making good money from his writing, he stayed at the two hotels that are still among the very finest in Paris—The Ritz and the Crillon. While on assignment in 1944 for Collier’s, Hemingway and a group of G.I.s “liberated” the Ritz on the Place Vendôme, clearing out a pocket of German soldiers and celebrating by ordering 50 Martinis. After the war he frequented the “Little Bar” at The Ritz, since enlarged and re-named “The Hemingway Bar,” where bartender Colin Field still keeps Papa’s memory burning and where they play old 78 RPM records on the phonograph.

Hemingway craved the glamor of The Ritz, which opened just a year before he was born, recalling the unalloyed pleasure he took “always haveing [sic] at least two bottles of Perrier Jouet in the ice bucket and the old Kraut Marlene [Dietrich] always ready to come in and sit with you while you shave.” One night at The Ritz he stayed up until dawn drinking Scotch with Jean-Paul Sartre and Simone de Beauvoir.

But when Hemingway just wanted to meet friends for drinks, he, like every American since 1919, headed for Harry’s New York Bar at 5 Rue Daunou (printed on the window, for Americans’ benefit, as “SANK ROO DOE NOO”).  Festooned with American college pennants, this birthplace of the Bloody Mary (under the name “Red Snapper”) was where Hemingway once dragged an ex-welterweight and his defecating pet lion into the street for disturbing the customers.

Of course, Hemingway was happiest in Madrid, and his spirit is palpable in that great city. Walk up the street from The Palace to the Plaza Santa Ana and you’ll find one of Papa’s favorite surviving tapas bars, Cerveceria Alemana, decked out with photos of famous bullfighters he knew well. Papa would drink with them while gobbling up a platter of Iberian ham, boiled shrimp with mayonnaise and crisp potato salad, sweet squid fried with vinegar, and wash it all down with white mugs of Mahou beer. Cerveceria Alemana remains just like that, scruffy, fast-paced, unforgettable. His favorite Madrid restaurant was the ancient Botin, where he said he once had the wonderful roast suckling pig with “three bottles of Rioja alta.” Botin, too, is as popular and dependable as ever, though now packed with tourists still attracted by Hemingway’s recommendation.

Alcohol was fuel to Hemingway but also his foe; he endured stretches of drunkenness and periods of abstinence. In Cuba and Florida he rose early in the morning, wrote until noon (unless he was out fishing or U-boat hunting on his boat the Pilar) and didn’t start drinking till early evening with dinner. Hardly a page of Hemingway is turned without reference to his characters drinking, but that was an era when drinking was standard behavior among Americans abroad.

He sometimes drank just to drink, but in his prose, no one ever wrote better about the pleasures of good wine and spirits.

John Mariani is an author and journalist of 40 years standing, and an author of 15 books. He has been called by the Philadelphia Inquirer, “the most influential food-wine critic in the popular press” and is a three-time nominee for the James Beard Journalism Award. For 35 years he was Esquire Magazine’s food & travel correspondent and wine columnist for Bloomberg News for ten. His Encyclopedia of American Food & Drink was hailed as the “American Larousse Gastronomique” His next book, “America Eats Out” won the International Association of Cooking Professionals Award for Best Food Reference Book. His “How Italian Food Conquered the World” won the Gourmand World Cookbooks Award for the USA 2011, and the Italian Cuisine Worldwide Award 2012. He co-authored “Menu Design in America: 1850-1985” and wrote the food sections for the Encyclopedia of New York City. In 1994 the City of New Orleans conferred on him the title of Honorary Citizen and in 2003 he was given the Philadelphia Toque Award “for exceptional achievements in culinary writing and accomplishments.”