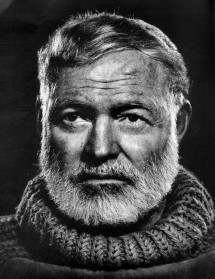 In her new biography, Influencing Hemingway: The People and Places That Shaped His Life and Work, Nancy W. Sindelar introduces the reader to the individuals who played significant roles in Hemingway’s development as both a man and as an artist. Sindelar ranks the fiction works of Hemingway.

Ernest Hemingway created memorable characters in his short stories and novels by drawing on real people—parents, friends, and fellow writers, among others. He also drew on real places and events to create settings and engaging plots. Whether revisiting the Italian front in A Farewell to Arms, recounting a Pamplona bull run in The Sun Also Rises, or depicting a Cuban fishing village in The Old Man and the Sea, Hemingway relied on his personal experiences, friendships and observations for the content of his work.

Since Hemingway’s works reflect interests and adventures at different stages of his life, creating a ranking for his fiction is difficult. However, the following ranks his most broadly acclaimed works and comments on their contribution to the Hemingway legacy. 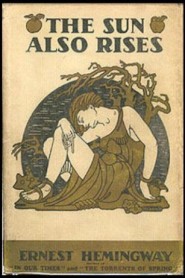 1. The Sun Also Rises – Hemingway’s first novel is at the top of my list because it reflects his reliance on his traditional Midwestern values as he encountered new experiences and values in post-World War I Europe. Using friends and acquaintances that populated the cafes along Boulevard Montparnasse in Paris, he reveals his concern about the valueless life of these Lost Generation characters and begins his personal and literary search for meaning in what appears to be a godless world. In the midst of their heavy drinking and meaningless revelry during a fiesta in Spain, Pedro Romero, the matador, becomes a hero. He conducts himself with honor and courage, and it is here we see the beginnings of what will become the Hemingway Code.

The book also tops my list because it reveals Hemingway’s courageous attempt to write in a new and different way by portraying the bad and the ugly as well as the beautiful. Though The Sun Also Rises was well received by the critics, it was not well received by Hemingway’s acquaintances who saw themselves portrayed as self-indulgent, alcoholic and sexually promiscuous in his unflattering, but honest, characterizations. Nor was it well received by his mother, who said he had produced “one of the filthiest books of the year.” 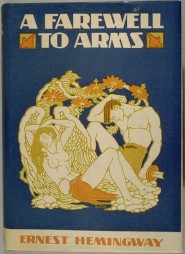 2. A Farewell to Arms – Hemingway’s second novel is a high on my list because it is the fictional account of events that changed and informed his world view. When Hemingway left the security of the Midwest and went to Italy looking for adventure as an ambulance driver in World War I, he got more than he had bargained for. The idealistic Midwesterner joined the war to end all wars, ready to display honor and courage, but was blown up in a trench. Then he fell in love, contemplated marriage and was rejected by the woman he loved. His confrontation with death, his subsequent wound, and his first experience with love all became catalysts for developing a code of behavior for facing life’s challenges.

A Farewell to Arms was the fictional result of Hemingway’s experiences in Italy and initiates what would become one of the most dominant themes in his novels, the confrontation of death. Though Catherine Barkley’s character seems dated to contemporary female readers, the book still demonstrates that Hemingway used what he learned in Italy to show that war brings out the best and worst in men and women. 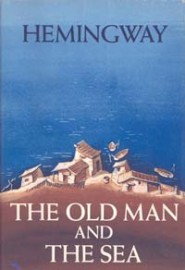 3. The Old Man and the Sea – After the unsuccessful reception to Across the River and into the Trees, Hemingway wrote his Pulitzer Prize winning novel to defend his reputation as a writer. Based on his experiences in Cuba, he created a character of an old fisherman. Alone in a skiff, the old man catches a great marlin, only to have it destroyed by sharks. The old man, who had been a champion arm-wrestler and a successful fisherman, was, like Hemingway, trying for a comeback.

The old man embraces the code for living that Hemingway first developed based on his experiences in World War I—the experiences in which a man confronts an unconquerable element. In fighting the sharks, the old man exhibits courage and grace under pressure, believing “a man can be destroyed, but not defeated.”

The reviews and success of the book were nothing less than phenomenal. Appropriately, Hemingway was aboard his boat and out on the Gulf Stream when he heard via the ship’s radio that the book had been awarded the Pulitzer Prize. 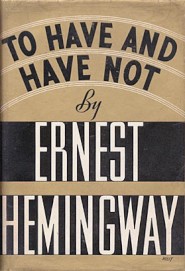 4. To Have and Have Not – Hemingway’s growing awareness of financial and social strata are reflected in To Have and Have Not. The characters are based on people the now famous author met in Key West—the working class he encountered on the docks and at Sloppy Joe’s, the rich who moored their boats in Key West harbor, and the illegal Chinese immigrants who were being smuggled from Cuba to Key West to promote tourism in newly formed Chinatowns.

In this Depression-era novel Hemingway comes close to arguing for social and political changes needed to help the working man. However, Hemingway does not see the New Deal remedies as the solution. As a result, the fate of the novel’s main character, Harry Morgan, outlines the limits of personal freedom, self-reliance and the absence of grace under pressure, and the closest Hemingway comes to a solution is for Harry to say, “No matter how a man alone ain’t got no f—— chance.” 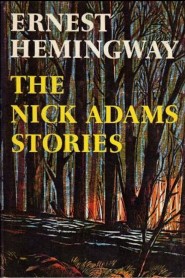 5. The Nick Adams Stories – This collection of short stories is a favorite because it provides insight into the life of the young Hemingway. As a child Ernest would accompany his father, Dr. Clarence Hemingway, as he provided pro bono medical services and attended to injured Indians, women in child-birth, and individuals in a variety of life-threatening situations in the Indian camps of northern Michigan. The memory of one of these trips appears in “Indian Camp.” Young Nick is with his father on a medical mission to deliver a baby. A Native American woman’s been in labor for two days, and Nick observes his father perform a Caesarian with a jackknife sterilized in a basin of boiled water.

Similarly, the reader gains insight into the relationship of Hemingway’s parents in “The Doctor and the Doctor’s Wife” and understands Hemingway’s feelings of separation from his family and life in Oak Park after returning from World War I in “A Soldier’s Home.” 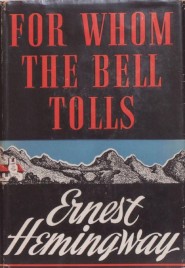 6. For Whom the Bell Tolls – Based on his experiences as a war correspondent during the Spanish Civil War, this novel contains the classic Hemingway elements—a main character demonstrating grace under pressure and a plot that combines the interest and conflicts associated with love and war. As with his other works, Hemingway uses his friendships and personal experiences. Robert Jordan is modeled after Robert Merriman, an American professor who left his research on collective farming in Russia to become a commander in the Abraham Lincoln Brigade and was killed during the final assault on Belchite. Maria is based on a young nurse of the same name who was gang raped by Nationalist soldiers early in the war. The novel’s three days of conflict takes place near the El Tajo gorge that cuts through the Andalusian town of Rondo, where a political massacre like the one led by Pablo occurred early in the Spanish Civil War.

Though some readers find the details of the battles tedious, it is one of Hemingway’s most popular novels. The book was published in October, 1940. By April, 1941 almost 500,000 copies had been sold, and in January, 1942, the movie rights were purchased by Paramount for $100,000.

Want to reprint? Get permissions.

Photo courtesy of the Estate of Yousuf Karsh

4 thoughts on “Hemingway’s Best Novels in someone’s opinion. This includes the Big Three, and does not include A Moveable Feast which was not a novel–or was it?”