Good day!  A new display at the JFK Library, Hemingway Collection. I will catch it in the next few weeks. Hope you are having a great summer. Best, Christine

“Ernest Hemingway: A Life Inspired” opened Thursday at the John F. Kennedy Presidential Library and Museum, which has become the leading research center for Hemingway studies.

Visitors to the expanded show will see manuscripts for “A Farewell to Arms,” “The Sun Also Rises,” “For Whom the Bell Tolls” and other Hemingway works — but they’ll also glimpse popular paperback books from the first half of the 20th century, as well as magazines, photographs and other mementos pulled straight from his world.

It’s an elaborate attempt to portray “Papa” in his proper context. 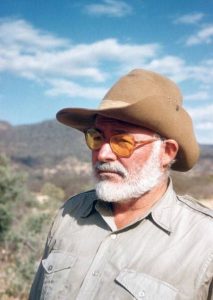 “It is now our pleasure to present a permanent Ernest Hemingway exhibit that tells the writer’s story by weaving together his literary masterpieces with his worldly inspirations,” said James Roth, the JFK Library’s deputy director.

“The exhibit places the viewer in Hemingway’s shoes, seeing the people and places that inspired his greatest works,” he said.

It includes many of the papers, photos, fishing rods, mounted animal trophies and other quirky personal belongings that Hemingway’s widow, Mary, retrieved from the author’s former estate in Cuba with help from JFK after her husband died in 1961. She later offered a trove of items to Jacqueline Kennedy for safekeeping and display at the Boston library, which opened in 1979.

It’s since become the world’s No. 1 repository of Hemingway lore.

Hemingway and Kennedy never met, but the late president was an admirer. He wrote Hemingway for permission to use his oft-quoted phrase “grace under pressure” in the opening to JFK’s own Pulitzer Prize-winning “Profiles in Courage.”

The new permanent display builds and expands on a 2016 temporary but ambitious exhibition, “Ernest Hemingway: Between Two Wars.” Curated by Hilary Justice, the presidential library’s Hemingway expert, the latest presentation draws from virtually every aspect of JFK’s vast Hemingway collection.

On show are first editions of Hemingway’s major works; personal photos from his own collection; and photos of the women who inspired him. (Spoiler alert: Hemingway had a reputation for being a “man’s man” and a misogynist, but strong women helped shape his art.)

There are also pages from early drafts of some of Hemingway’s most celebrated books.

“The Old Man and the Sea,” his last major work of fiction, figures prominently. A Live magazine edition of the novel is on display, along with 32 covers of translations done around the globe.