Hemingway owned a house in Ketchum, Idaho at the time of his death.  He killed himself there and he was buried in Ketchum. He lived simply in that home with few adornments.

The ownership of the house after his death was gifted by his wife, Mary, to the Nature Conservancy.  It was a modest two story 2,500 square foot house which he loved.  The Nature Conservancy just transferred the house as a gift to the Community Library, a privately funded public library.  The library has indicated that an apartment in the house will be renovated for a residency program for visiting writers, scholars and artists.  The house still has many of Hemingway’s personal possessions and some will be put on display at the Sun Valley Museum of History.

Hemingway owned the house from April 1959 until his death, July 1961, at the age of 61.  The house was given by Mary Hemingway to the Nature Conservancy with the restriction that it was precluded from operating as a public museum.  The Nature Conservancy used the house as a field office before outgrowing it.  The property is 13.9 acres and while the property is worth millions, the house is “small and outdated compared with the mega mansions common in the area.”

The Carr Foundation supplied the money to make the purchase of the Hemingway house by the Community Library possible.  It appears that philanthropist Gregory Carr, who was born in Idaho and owns a home in the Ketchum area, made the donation.  Jenny Emery Davidson, who is the executive director of the library, noted that “people are interested in Hemingway but the people who have stepped up so far are people who care about Idaho.”  She also said the house is a perfect fit for the library, which has a regional history division, and is keen to promote the area’s literary icon.  The house will not be open to the public like Hemingway’s other homes in Key West and Havana, but there will be some access. (At this time people cannot enter the house in Havana but can view it from the outside.  It’s being restored and it is unclear if there will be access to the interior in time.)

Davidson noted that “we plan to treat it as a home.  Sometimes people invite small groups of people to their home.”

So time moves on but Ketchum, Idaho maintains its love and respect for the Hemingway property. 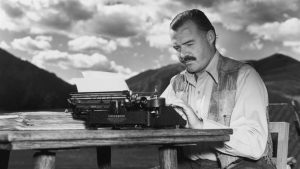