How driving ambulances during World War I inspired Hemingway
By Michael Riedel March 19, 2017

Several major artists and innovators of the 20th century served as volunteer ambulance drivers during World War I, shaping their experiences on the battlefield into groundbreaking works.

The carnage horrified poet E.E. Cummings, who drove an ambulance in France. He would go on to fracture his verse the way bodies were fractured in the trenches. He poured his anger at the senselessness of war into letters back to the United States — and found himself in a detention camp for subversives. He recounted his imprisonment in his novel “The Enormous Room.” 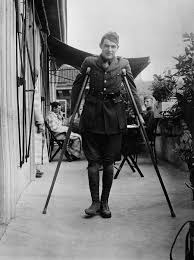 W. Somerset Maugham, who trained as a doctor, did not flinch from the horror. He picked up body parts and treated gaping wounds with cool detachment, the kind of detachment he would later use to dissect the emotional lives of his characters in novels such as “The Painted Veil.”

At 16, Walt Disney was too young to enlist, so he volunteered for the Red Cross as an ambulance driver. He was sent to France and had little contact with the wounded. He spent most of his time drawing. “I found out that inside or outside of an ambulance is as good a place as any to draw,” he said.

While training to be a driver, Disney befriended Ray Kroc, another patriot who was too young to enlist and had chosen to be an ambulance driver instead. In the 1950s, Kroc would become one of the country’s best known businessmen when he turned McDonald’s into a fast-food empire.

But the deepest friendship to develop in the ambulance-driver ranks was between Ernest Hemingway and John Dos Passos. They shared not only an occupation but a desire to revolutionize American writing — that would last until the ideological battles of the 1930s tore it apart.

Their relationship is detailed in James McGrath Morris’ new book, “The Ambulance Drivers: Hemingway, Dos Passos, and a Friendship Made and Lost in War.”

“The world was shattered, and Hemingway and Dos Passos explicitly felt they would have to write about life in a different way,” Morris told The Post.

Dos Passos had poor eyesight that made him unfit for combat, so he joined the volunteer ambulance corps. He had to pick his way through corpse-filled trenches at Verdun, writing in his diary, “Horror is so piled on horror there can be no more.”

Hemingway tried to enlist in the army, but he, too, failed vision tests. He joined the Red Cross and was dispatched to an ambulance unit on the Italian front. He met Dos Passos over a dinner of rabbit stew and red wine at a hospital near Schio.

A mortar cut short Hemingway’s service. He spent the rest of the war in a hospital, where he fell in love with a nurse who inspired the character of Catherine Barkley in “A Farewell to Arms.”

Dos Passos had a very different experience. “[He] carried buckets of body parts and suffered a mustard-gas attack. For him war was senseless and crushing and must be opposed,” Morris said.

After the war they both lived in Paris, spending hours in Left Bank cafes discussing art, books and their desire to revolutionize American literature.

The friendship showed signs of fraying, especially when Dos Passos urged Hemingway to join left-wing causes that Hemingway eschewed. But they continued to spend a lot of time together fishing — and drinking — in Cuba and the Florida Keys.

The break came during the Spanish Civil War. Dos Passos, while staunchly anti-fascist, began to sour on the left-wing government of Spain, whose main ally was the Soviet Union. Hemingway supported the government in its battle against General Franco and the ­fascists.

When a friend was killed in the war, Dos Passos suspected (with good reason) that the communists had murdered him. Hemingway told him, “Don’t ask questions,” Morris writes.

In 1964, decades after the Spanish Civil War and three years after his own death, Hemingway exacted revenge on Dos Passos with the posthumous publishing of his memoir, “A Moveable Feast.” He depicted Dos Passos as a parasite who lived off rich friends.

As Morris writes, “War forged their friendship, but in the end ­another war took it from them.”