With all of the talk about politicians and Russian connections, there has also been in the news recently much discussion of Hemingway’s Russian connections. It’s interesting to me since this information has been around, open, and in all biographies, yet seems to be presented as a new finding. I’m an amateur student of Hemingway and this is what I’ve known:

For some reason, the recent writings have put some sinister cast on Hemingway’s activism. In terms of the times, the Russians were our allies in World War II, and there was nothing sinister about it, although Hemingway did get on the FBI watch list as a result. He was not a fan of Fidel Castro, although he did hope for the best and tried to keep a low profile so that he could remain in Cuba unmolested. Ultimately, that turned out to be impossible. 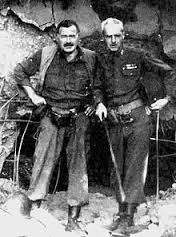 In August 1944, Hemingway was in Paris during the liberation and his ego made him unpopular at times with some. He did join the tank line heading toward Paris in Rambouillet and was present at the liberation of Paris. Although he went to France as a war correspondent for Colliers, he didn’t have to put himself in any danger but he did. There have been criticisms that he took too much control at times, and/or that he had a disproportionate amount of liquor available to him. Andy Rooney, who was also in France covering the allied efforts as a foreign correspondent for Stars and Stripes, a military newspaper, disliked him. He called him a “jerk.” Hemingway was like that. Either his bigger than life presentations inspired you and was fun or it turned you off and you were wary.

Still, I’m not quite sure why Hemingway is now portrayed as some sort of collaborator in a bad way. At that time, you were for or against the Nazis, and he was against them. So please read about it and decide for yourself.

2 thoughts on “Hemingway and the Russians”