This was a famous saying from Hemingway but science is now backing it up.  While it’s a cool saying, in reality, it was pretty rare that Hemingway wrote drunk.  While writing, he tended to follow a very rigid schedule of getting up early, working until the early afternoon and then stopping.  He also liked to stop writing only when he knew what was happening next in his story or novel, so he could start with a jolt the following day.  When once it was suggested that he wrote drunk, his response was “Jeezus Christ! Have you ever heard of anyone who drank while he worked?  You’re thinking of Faulkner.  He does sometimes and I can tell right in the middle of a page when he has had his first one.  Besides, who in the hell would mix more than one martini at a time?”

An Australian blog, The Expert Editor, recently wrote about the science behind writing drunk and editing sober.  Using a variety of studies, the author concluded that at a fairly low threshold of alcohol, the brain actually is stimulated in creative ways the sober brain might not be.  “The part Hemingway got wrong however is that at the point of legit drunkenness, the quality of one’s writing goes south pronto.  The author of For Whom the Bell Tolls may have built up an elephantine tolerance for alcohol to the point where he could drink a fifth of whiskey and still crank out prose that would be studied decades later.”

But again, while there is no question that Hemingway did become an alcoholic,  he was not writing his masterpieces drunk. he took writing way too seriously for that.  He might drink later in the day, but not while he was creating. 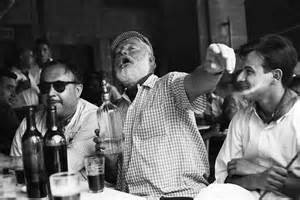 The science seems to suggest that because alcohol suppresses certain responses and makes you less focused because it decreases your working memory, you start to care less about what is happening around you and enables you to “think outside the box.”  Creativity is your ability to think of something original from connections made between preexisting ideas.  Apparently, the idea is to be tipsy but not drunk, at which point your focus becomes too diminished to hit that creative synapse.

The article goes on to note that it would be imprudent to edit while drunk.  Try editing while having coffee.  Coffee has the opposite function of alcohol because caffeine provides more working memory so that as we focus on a task we can make those changes.  Coffee also helps you to ignore distractions while editing your own work.

Hemingway used to edit as he went along but then he would put it aside and look at it afresh.  For those of you who are writers, you are likely familiar with rereading your own writing so many times that you just have no perspective anymore and your eyes are hopping over edits that should be made.  Sticking your manuscript in a drawer for a while is not a bad idea.  Things you never saw before all of a sudden jump out at you.  What you thought was clever now seems contrived and your witty dialogue feels forced.

So, there you have it.  Hemingway backed up by science, ye of little faith.