Mary was Hemingway’s fourth wife and his widow.  She took a fair amount of abuse. I was never certain if she truly loved him that much or if she loved being Mrs. Ernest Hemingway that much.  She survived his infatuation with Adriana Ivancich, his bad behavior and heavy drinking that was the precursor to that bad behavior and she helped as ill health hit both of them, but particularly Hemingway.

Hemingway seemed to like all sorts of women but the kind that he married was level headed and smart.  He never left Pauline for Jane Kendall Mason, beautiful though she was, as she was emotionally unstable.  Hadley, Pauline, Martha, and Mary were all stable, intelligent women.  All but Hadley were journalists in their own right.  All but Martha were very deferential to Hemingway and perhaps that’s why he always said that was the one marriage he regretted. 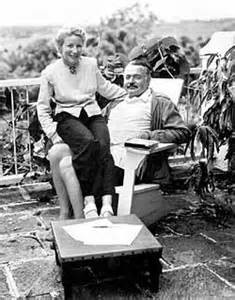 Anyway, Mary is being honored in her hometown in MN.  All of the other three wives strangely were from St. Louis.