It is not surprising to me that there continues to be so much interest in Hemingway even 53 years after his death. As far as I know, the following movies are in the works.

1) A Moveable Feast, being either directed or produced by Mariel Hemingway. No word on who will be in it.

2) Hemingway and Fuentes, being produced and directed by Andy Garcia. Gregorio Fuentes was Hemingway’s Captain of the Pilar and also good friend. Hemingway was to be played by Anthony Hopkins, now replaced by Jon Voigt. I believe that Andy Garcia will be playing Gregorio Fuentes.

3) I don’t know the title but there is a movie in production about Maxwell Perkins, Hemingway’s editor (also Fitzgerald’s editor) to be played by Colin Firth. It focuses however on Perkins’ tempestuous relationship with James Jones  (From Here to Eternity) more than on Hemingway or Fitzgerald but I’m sure both will figure prominently.

Two fairly recent books have come out: Rene Villarreal, Hemingway’s Cuban Son. I just bought it and have not had a chance to read it yet. Rene was Hem’s major duomo at his Cuban home, The Finca Vigia. It sounds like a sweet and lovely portrayal.

Hemingway Wives: This is a book about Hem’s wives through each one’s point of view. Apparently the author most identified with Pauline which is a change from most books. Most relate to Hadley or Martha. I have mine on pre-order.

I myself am working on a Hemingway themed novel. When far enough along, I’ll share some. I am pretty excited about it and hope that I can write it as well as I see it in my mind. 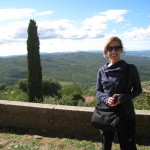 following the Hem trail in Italy. I am not sure there is a Hemingway trail but of course there is Venice, the places that he went in the war, and Rapallo where I did spend time. I enjoyed the hotel where he wrote “The Cat in the Rain,” one of my favorites.